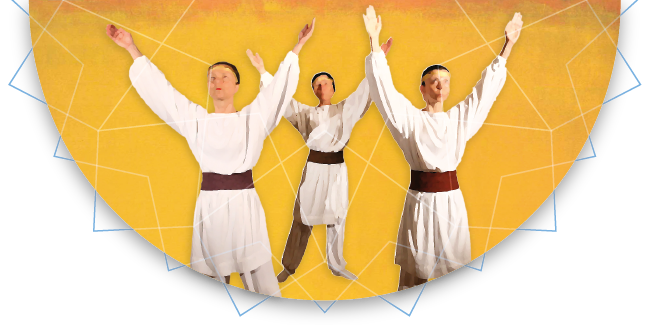 through movement
of body
feelings
and mind

As part of the Legominism of human transformation, the Movements conceal a message from the past that needs to be carried into the future

How can we decipher this message and embody its teaching? 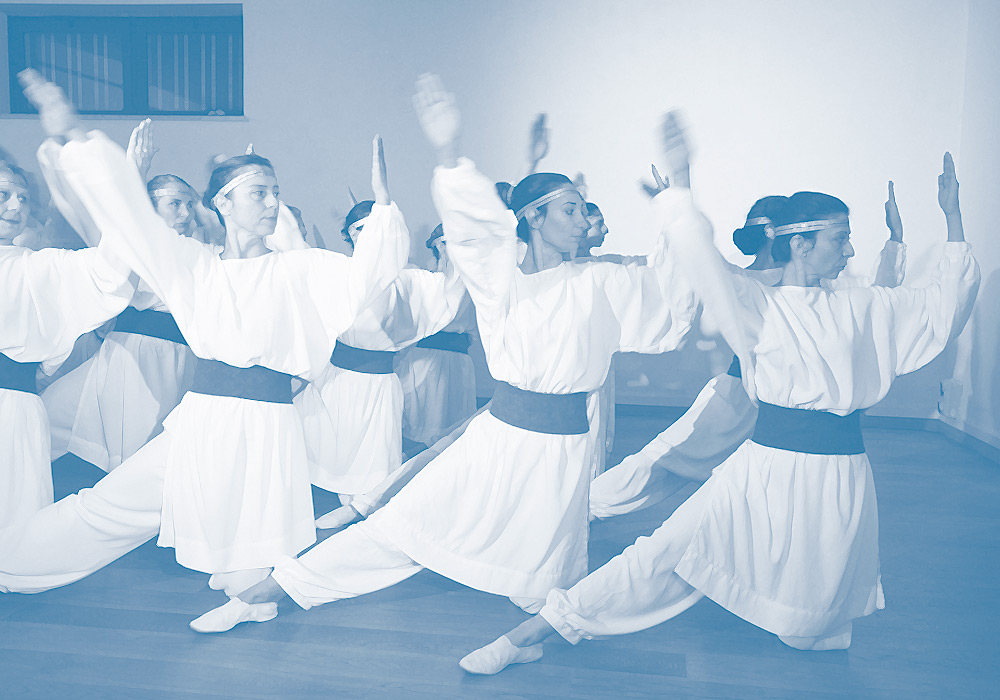 How can the study and practice of the movements help us rediscover a sense of the sacred that has been lost in today’s world? 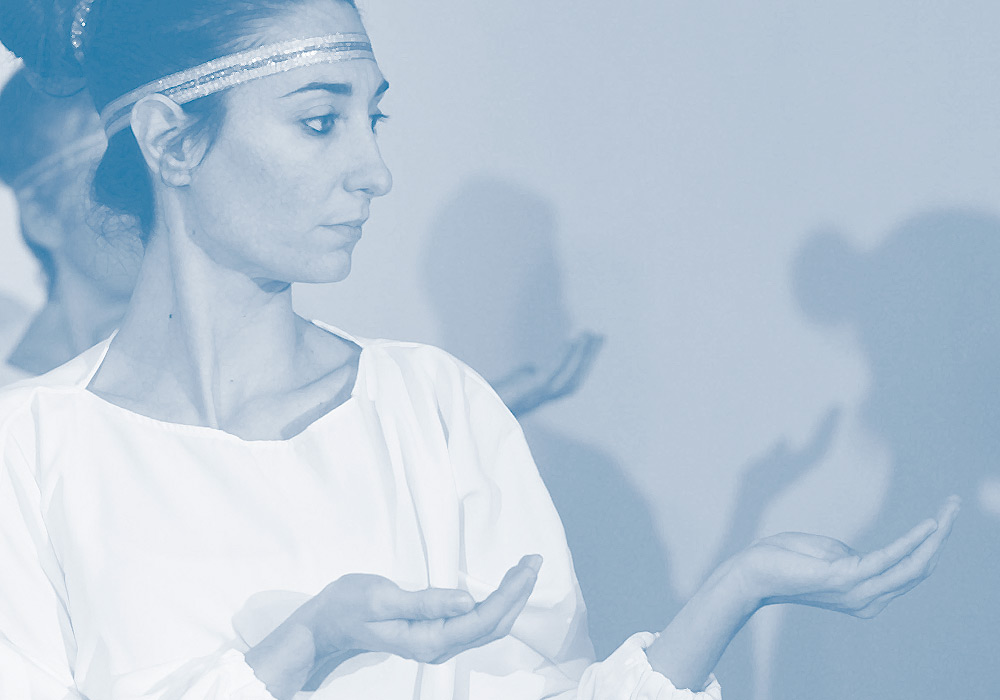 In practicing the Movements, we come to a direct experience of our whole being – something that intellectual study alone cannot achieve. 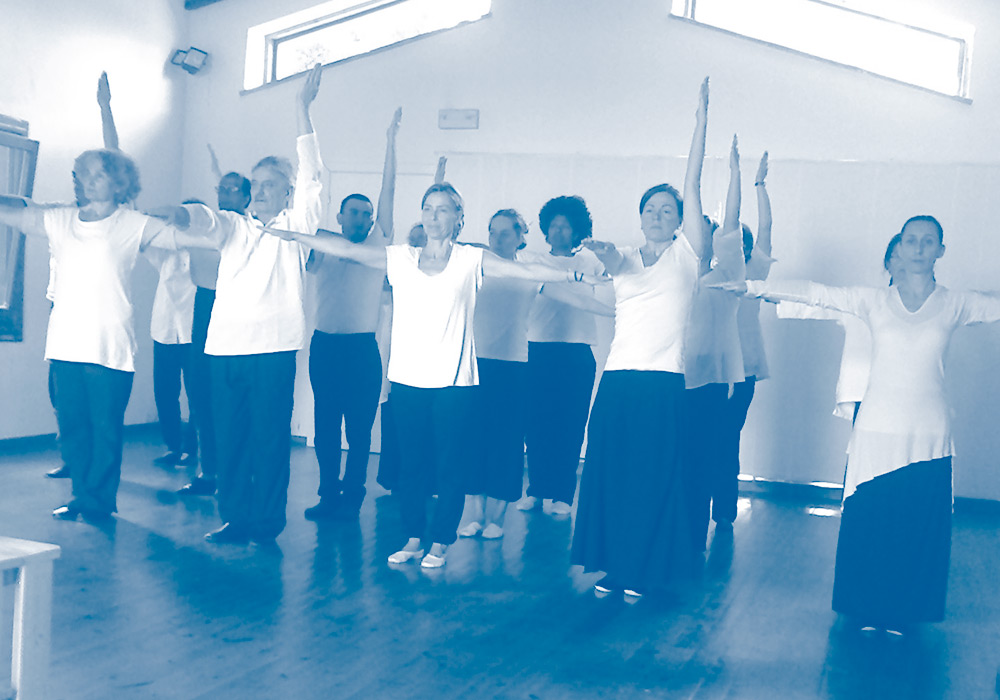 “….Thus it is not our efforts that produce the experience of being. They simply prepare the way”.

“Being is always working in us, trying to break through the hard crust of our ego into the light of consciousness”.
Jeanne de Salzmann

"In a real civilization woman understands her function and has no wish to be other than woman".
G. I. Gurdjieff 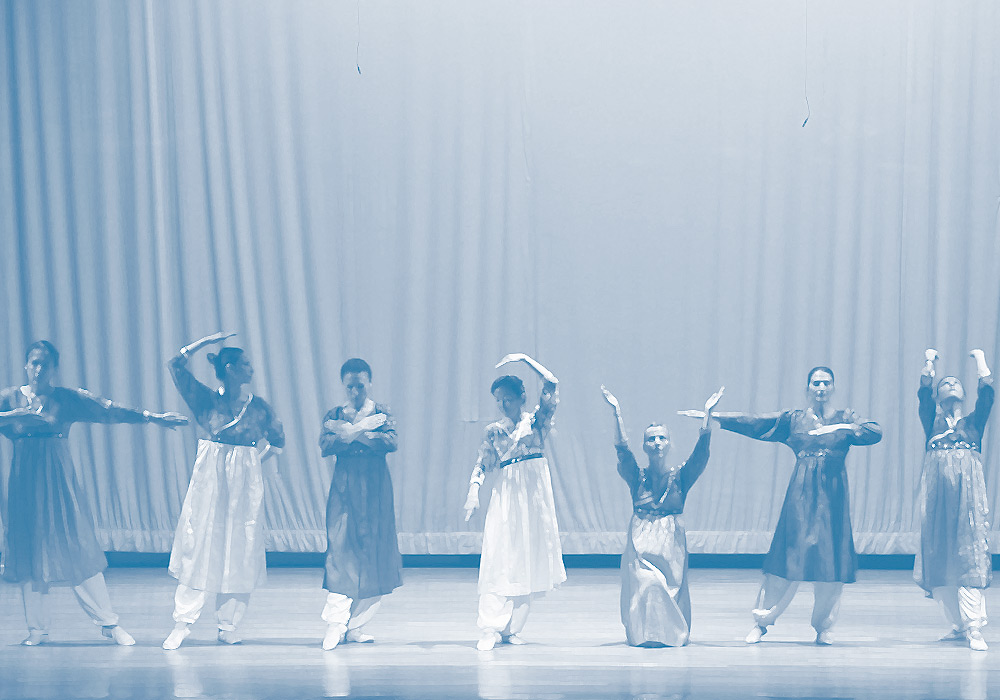 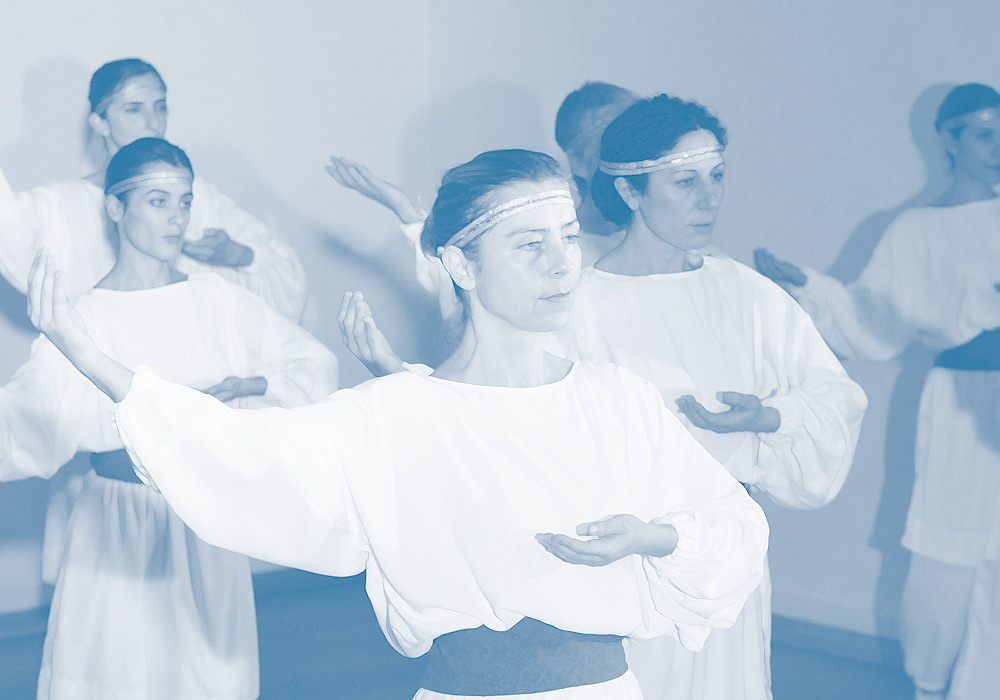 The aim of objective Sacred Art is to awaken a coscious question in us.

Movement and sound are closely connected. In a Movements class the pianist plays a fundamental role, offering much more than just an accompaniment. Sound quality defines and enriches the inner process activated during the practice of Movements – until you come to a completely new experience of sound, which illuminates your inner life with energy. The music composed by Gurdjieff with his Russian pupil Thomas de Hartmann is intimately connected to this “inner journey” and was conceived as an authentic means for us to “awaken” along our path towards real knowledge. 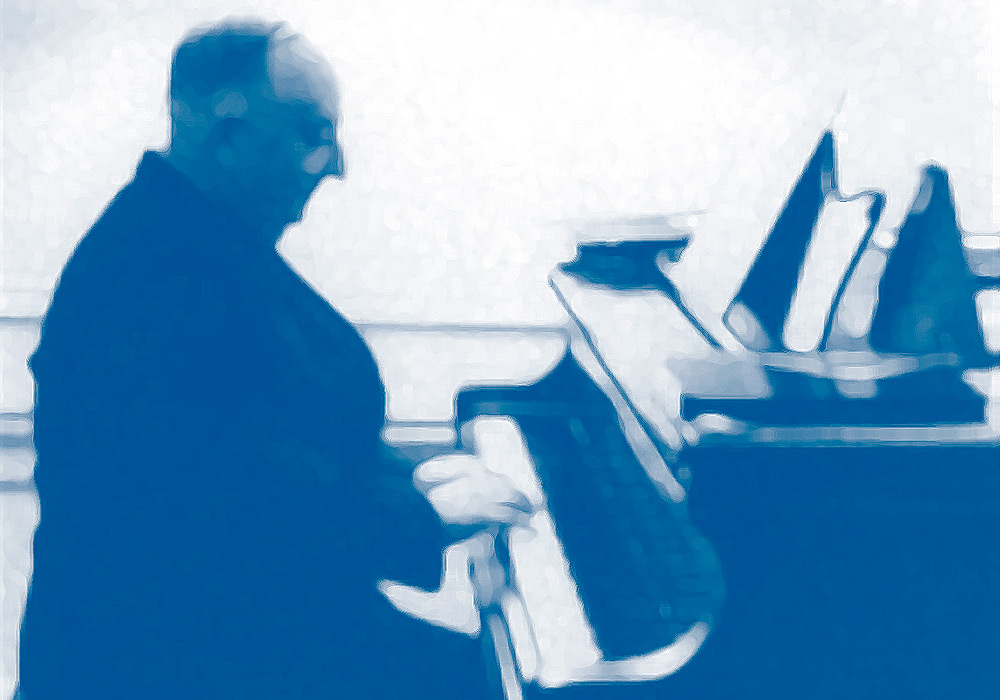 “De Hartmann played with great depth of understanding and poetic sensibility; and then, of course, it was his own music….it gives the sense of the pianist–composer going to the very heart of each phrase. The music emerges in all clarity and integrity; the pianist and his personality disappears entirely from the scene. One cannot ask more from any musical rendering….he brings the listener more closely and intensely into contact with himself … "

"All and everything is a critical study of certain fundamental points of our civilization, and of our ways of thinking. If we could understand the book it would be of immense value, but that is the great difficulty. [...] The text appears difficult only when one tries to ‘understand’ it solely with one’s mind. [...] Once one begins to allow feeling play an equal part with thought, one begins to see that the text is generating an actual experience in reading it: it is not simply ‘about’ something but is working in oneself."

From Introduction to J.G.Bennett: TALKS ON BEELZEBUB’S TALES, by Anthony Blake 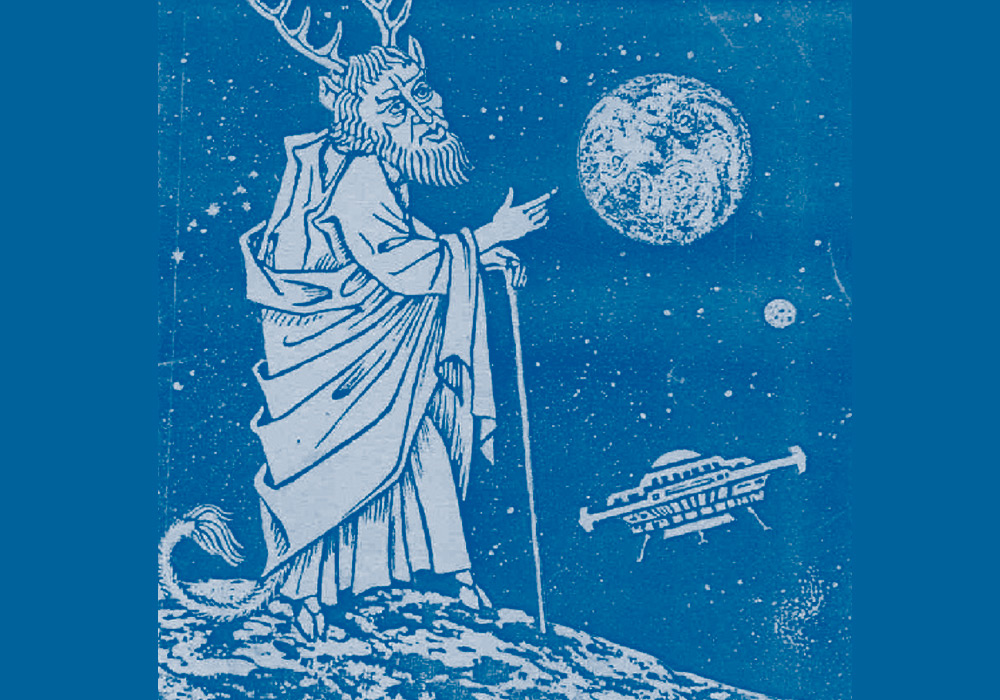 "...… I wish to bring to the knowledge of what is called your “pure waking consciousness” the fact that in the writings following this chapter of warning I shall expound my thoughts intentionally in such sequence and with such “logical confrontation,” that the essence of certain real notions may of themselves automatically, so to say, go from this “waking consciousness”—which most people in their ignorance mistake for the real consciousness, but which I affirm and experimentally prove is the fictitious one—into what you call the subconscious, which ought to be in my opinion the real human consciousness, and there by themselves mechanically bring about that transformation which should in general proceed in the entirety of a man and give him, from his own conscious mentation, the results he ought to have, which are proper to man and not merely to single- or double-brained animals.

I decided to do this without fail so that this initial chapter of mine, predetermined as I have already said to awaken your consciousness, should fully justify its purpose, and reaching not only your, in my opinion, as yet only fictitious “consciousness,” but also your real consciousness, that is to say, what you call your subconscious, might, for the first time, compel you to reflect actively.."

From “Beelzebub’s Tales to his Grandson, chapter 1, Arousing of Thought”, G.I. Gurdjieff 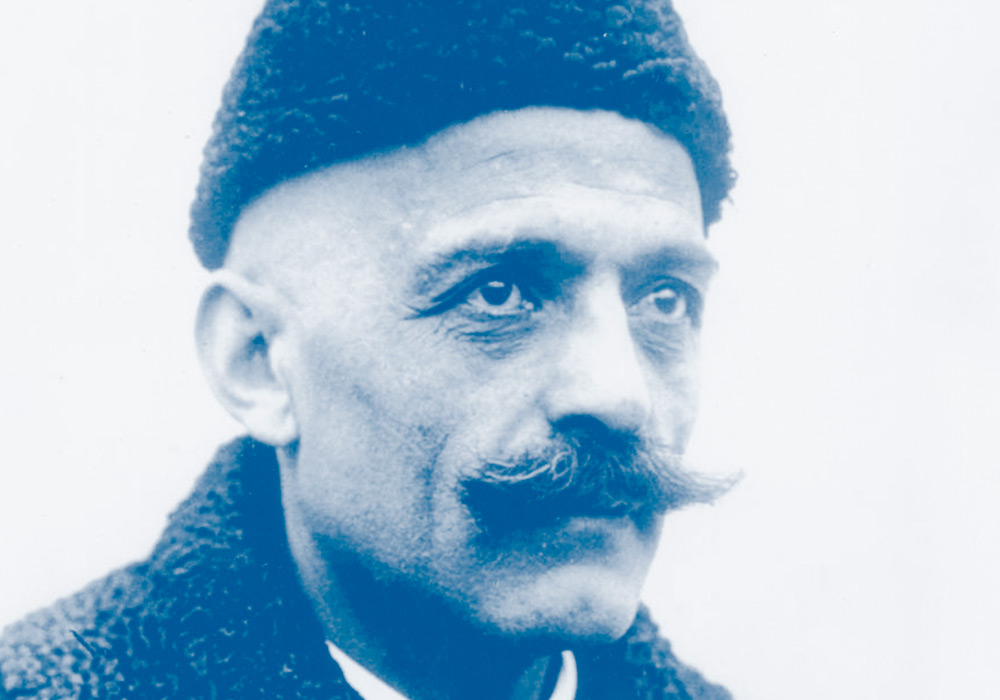 Gurdjieff teaching offers food for the growth of different aspects o Man's nature,including ideas for the mind, special exercises and dances for the body/mind connection, and sacred music to awaken sensitivity in the feelings  - stirring up questions that go far beyond verbal formulation, in the depths of the listener's inner world.